After crossing Australia on the Great Central Road, the idea was to stay in the outback for a while and ride some off-road tracks in the Simpson Desert. However, we found that it had rained quite a bit, so the tracks were all closed. Too bad. Instead, we continued along the Stuart Highway to Cadney Homestead and from there into the southern outback. An off-road road leads through the “Painted Desert” – a scenically spectacular landscape. It effectively gives the impression that the desert here is painted with a wide variety of colors.

We continued to Oodnadatta, a tiny village with 200 inhabitants and a pink Raodhouse and starting point of the Oodnadatta Trek. Our route took us to Leigh Creek, where we reached the Gammon Ranges. In the middle of the dunes we set up our camp for the night. With a beer, we made our way to the top of the highest dune and let another wonderful day in Australia come to an end with a beautiful sunset. 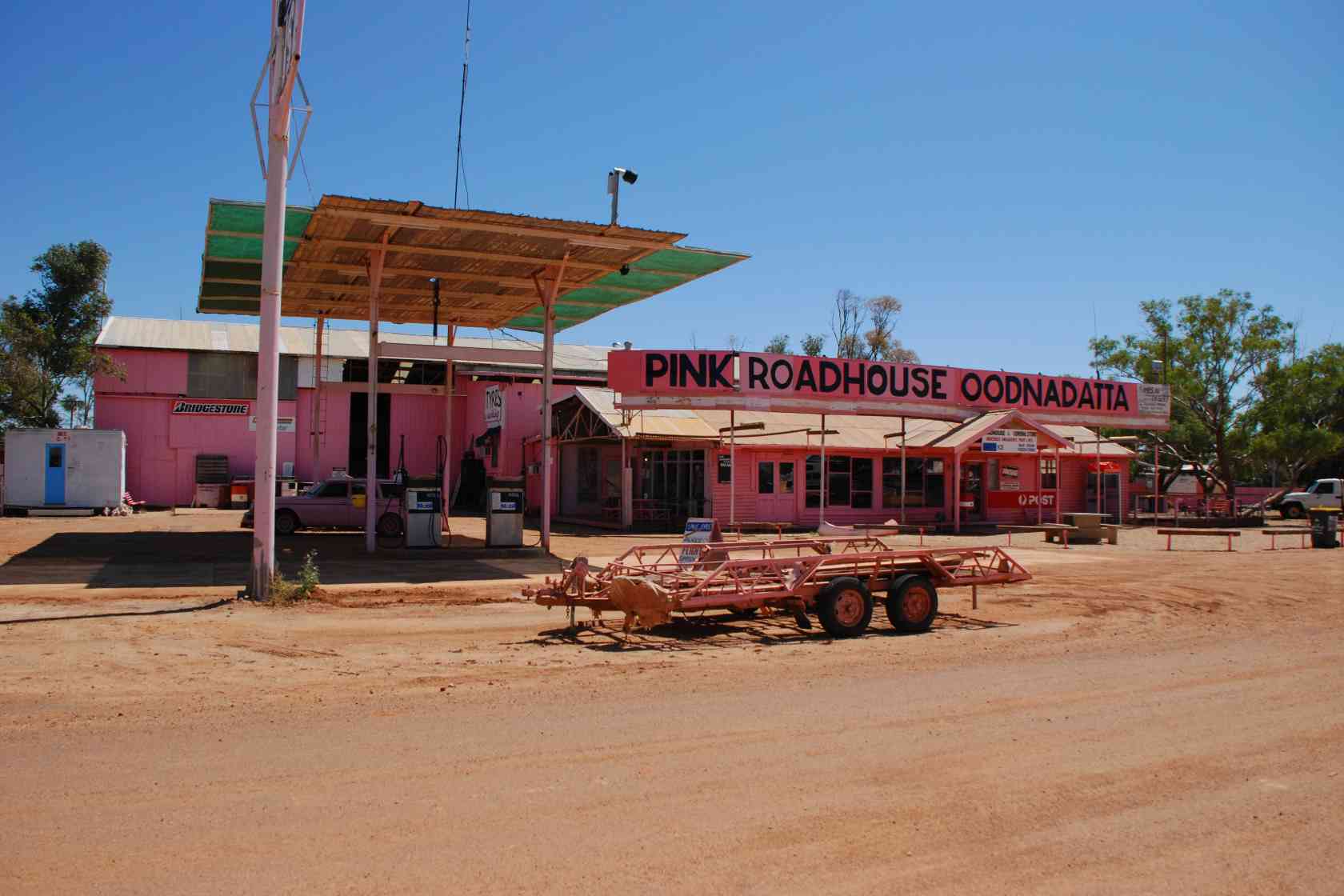 On the way to the Flinders Ranges we stopped first in the Gammon Ranges a bit further north. These are relatively small and rather unspectacular, so we quickly move on. So off to the Flinders Ranges, a 400km long mountain range with the geological highlight Wilpena Pound, a kind of crater formed by mountains. The Flinders is one of Australia’s top national parks and offers countless hiking and camping opportunities. Immediately we were enthusiastic about the park; along the “Scenic Drive” there are eight different campsites and lots of hiking trails. 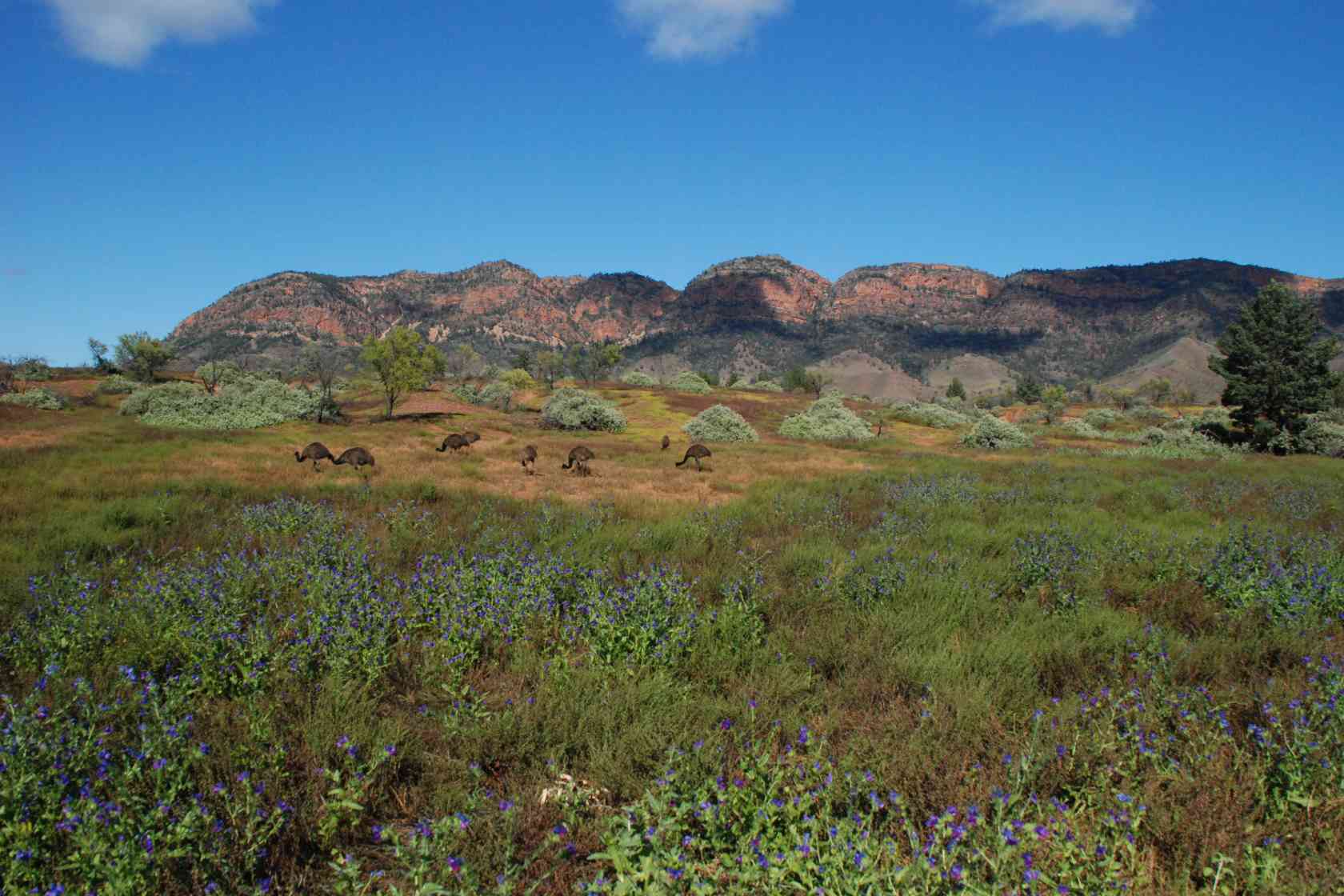 We set up on one of the campsites with unbeatable views. Unfortunately, it suddenly began to rain heavily and storm. Priorities quickly changed – a well-protected camp is now more important than the view – so we moved on. We never experienced such heavy rain in Australia before, the next day it even hailed. Overnight the dried up riverbed right next to our car swelled to a 60cm high flowing river. Where we were still hiking the day before, there would have been no getting through today. 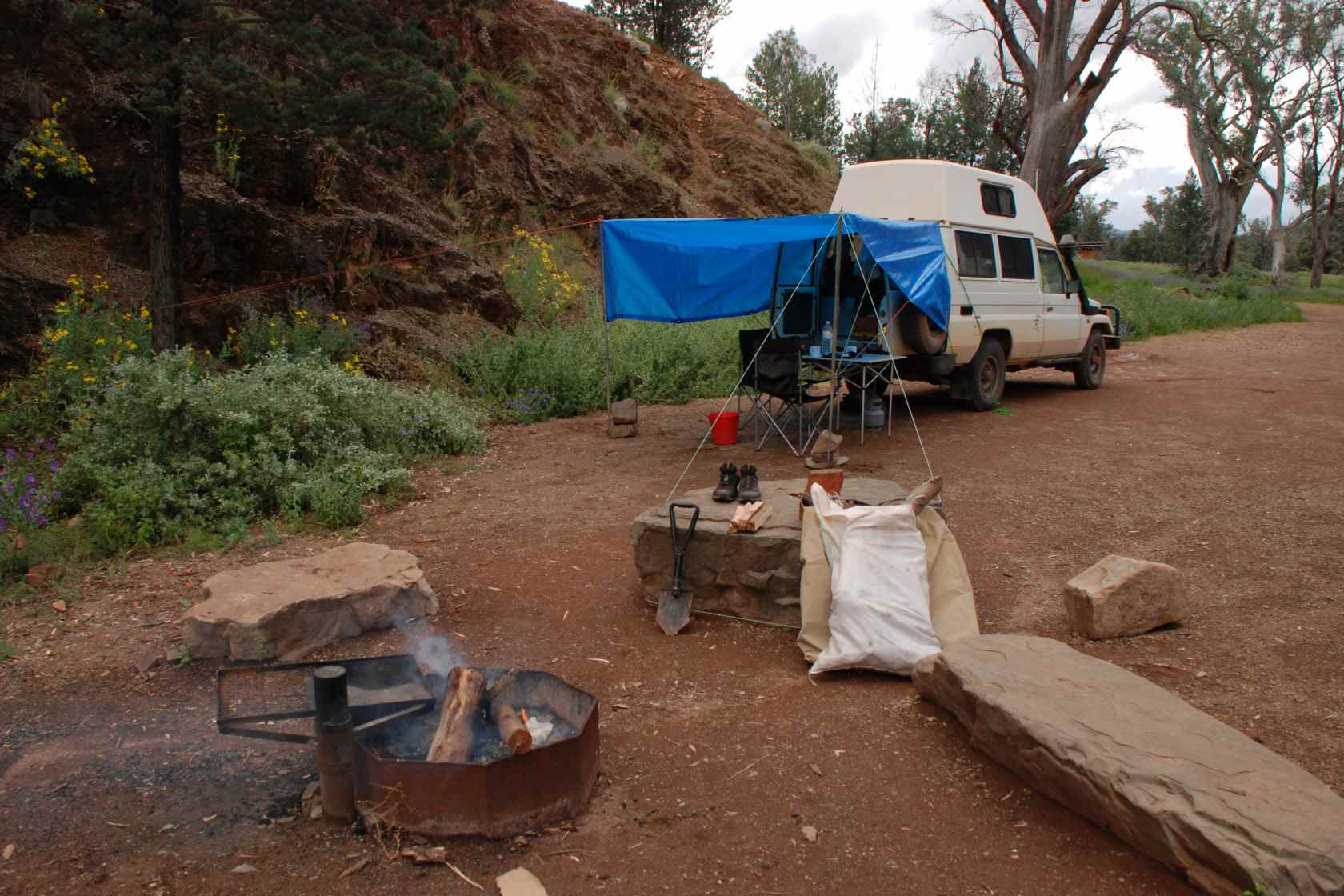 Excitedly we tackled the St. Mary Peak hike – a 22 km march to the highest peak (1’170m). We were thrilled. This hike was so far the most beautiful in Australia – the view on the way as well as from the summit unforgettable. The Flinders Ranges are one of the highlights of Australia for us – in our eyes an absolute “must see”. 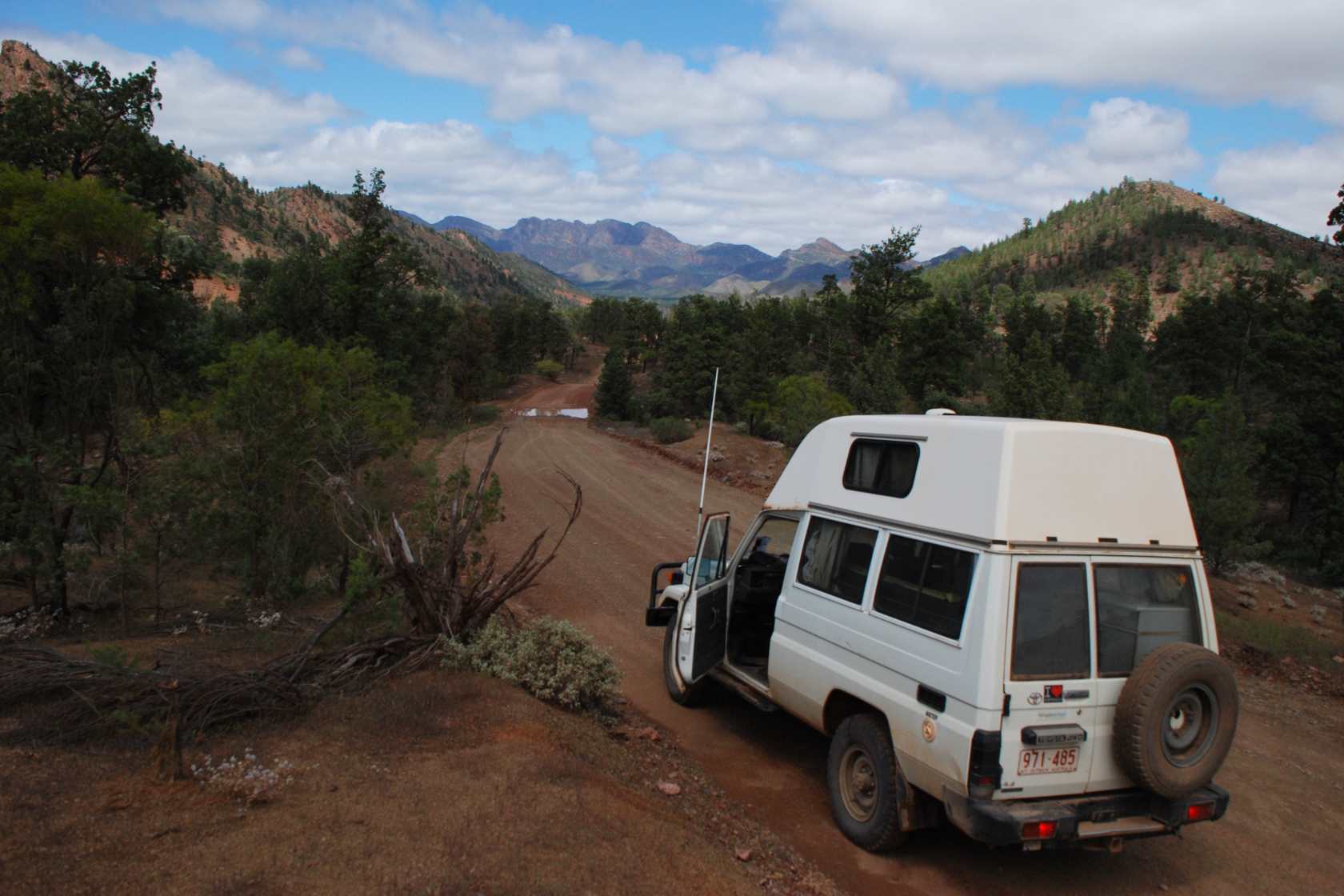 After Perth, we have arrived in the second major Australian city. However, we didn’t really like it – Perth had much more to offer. Nevertheless, we stayed a few days, namely to extend our visa. We have been traveling in Australia for five months and our six-month visa is about to expire. We only got half as far as we had planned. Australia simply has far too much to offer. In any case, we still have far from enough, which is why we extended our visa for another six months. In return, New Zealand unfortunately had to be left out. Since we have a perfect car with Speedy, this was the more sensible option for us than starting over in New Zealand. It would have been much cheaper and less cumbersome to apply for an annual visa from the beginning – but as we all know, hindsight is always wiser. The processing with all the paperwork was done relatively quickly. A few hours after our application at immigration, we had the visa in our pocket. Finally, we can continue planning and look forward to more months of adventures. 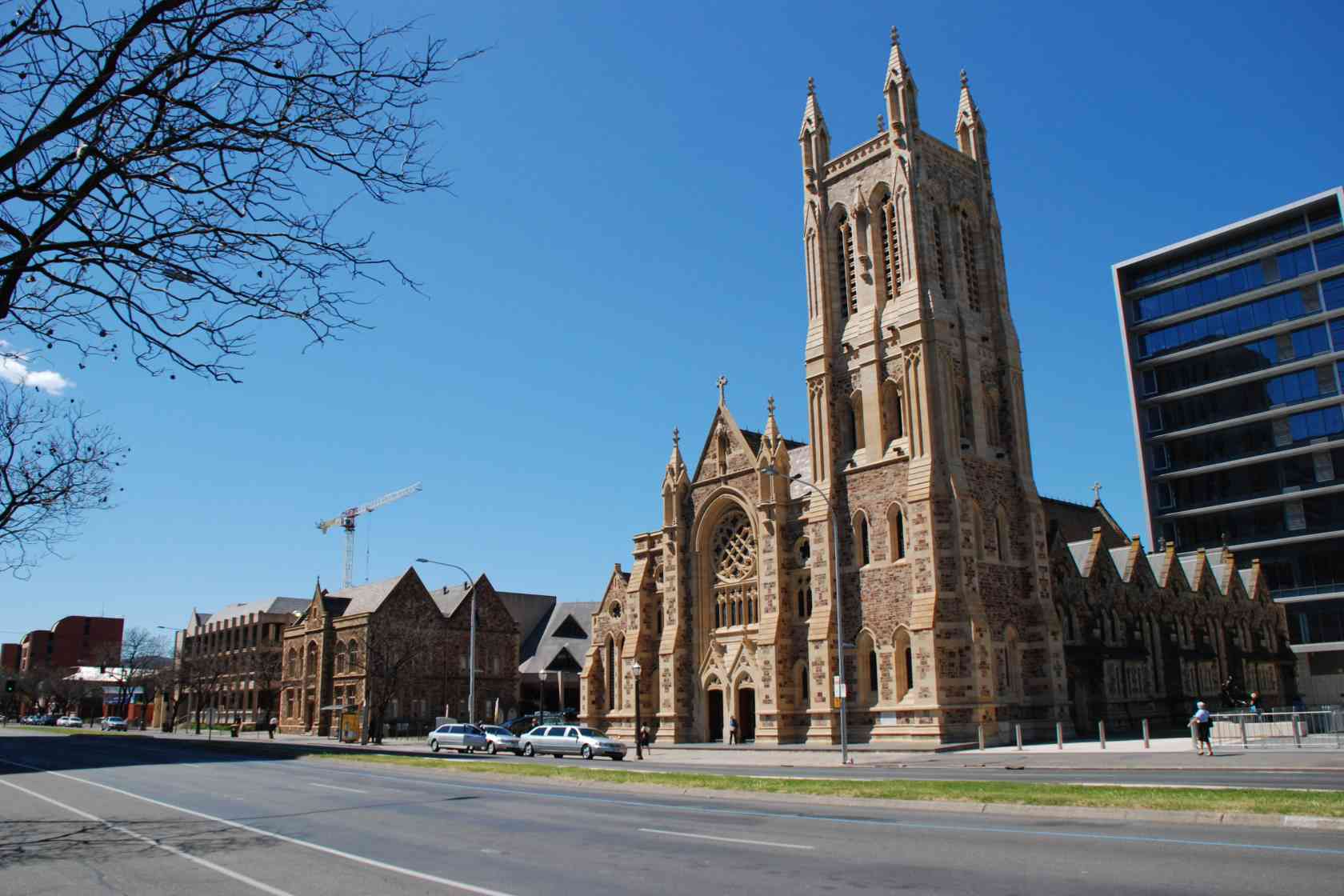 From Adelaide we continued towards the Murray River. An additional excursion, which we planned because Linda’s mother is coming to visit for a few days at the beginning of November. Since the visa business was done faster than expected, we were now two weeks early. Therefore, we drove towards Riverland to spend the two weeks in this area. In the process, we crossed part of the world-famous Barossa Valley, Australia’s largest wine region. A total of 65,000 tons of grapes are processed here annually. The size of the vineyards is impressive – several villages would stand on this area in Switzerland.

At the Murray River – with a length of 650km one of the longest rivers in Australia – we looked for a nice camping site, which we found in the Murray River National Park directly at the river bank. We spent a relaxing time there – reading, watching eagles and just enjoying the ambience. In the evening we lit a campfire, cooked and just let the beautiful atmosphere at the river affect us.

After a few days we headed back towards Adelaide where we spent a few more days at Fleurieu Peninsula until Linda’s mother arrived. 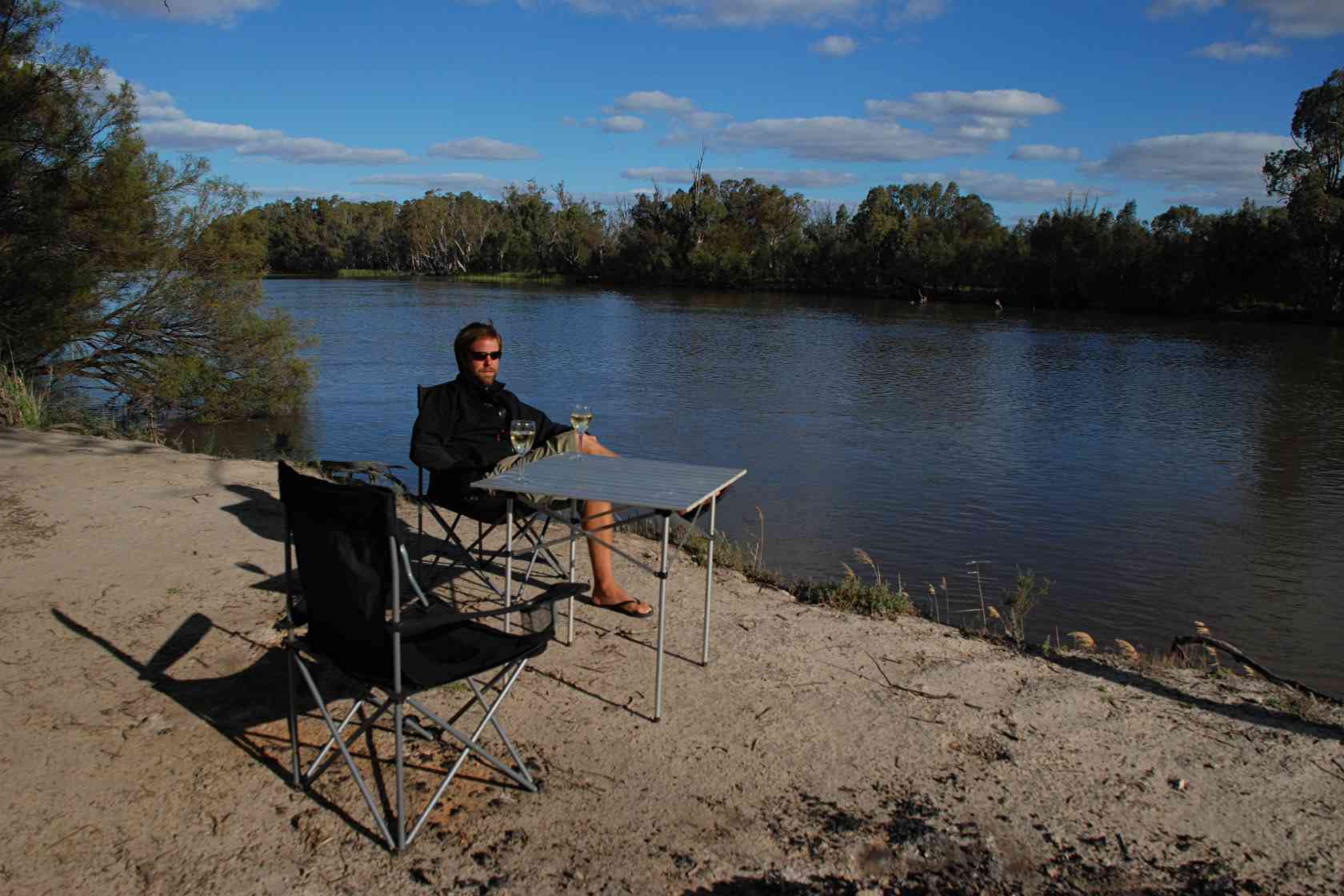 Just below Adelaide is the Fleurieu Peninsula, which has a lot to offer. Beautiful coastal stretches and national parks characterize the area. In Deep Creek National Park we spent a few days and did a lot of hiking. Green hilly landscapes, beautiful cliff formations and empty beaches make for a beautiful panorama during countless bushwalks.

Beautiful were also the countless kangaroos in the park. We’ve been privileged to see a few, but so many in one fell swoop has impressed us. Hundreds were feeding in the hills in the morning and evening and relaxing under the trees during the day. 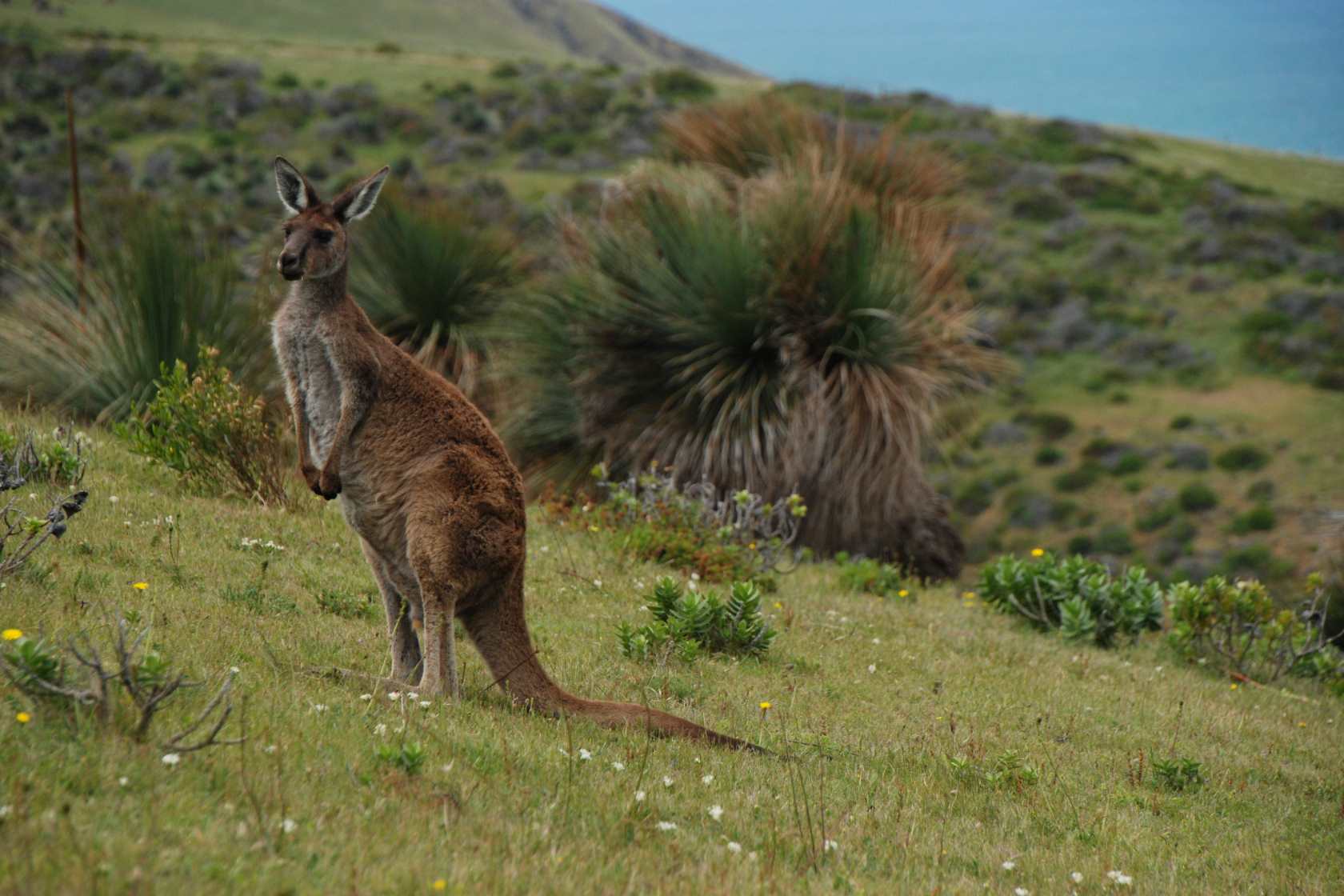 The day came when Linda’s mother arrived; so we went to Adelaide to pick her up from the airport. Only a few days remained – she interrupted a vacation in Hong Kong to visit us. So the most sensible thing to do was to go back to Fleurieu Peninsula. Anything else would have been at least a 400 km drive. The park was also very beautiful – you can easily stay a few days longer. The main thing for us was to show her how we live here and what we experience. Therefore, where exactly we do this is secondary. We were very happy about the visit and spent some nice days. She also immediately adapted to our lifestyle and spent the night in the tent. This was certainly an adventurous experience for her as well. 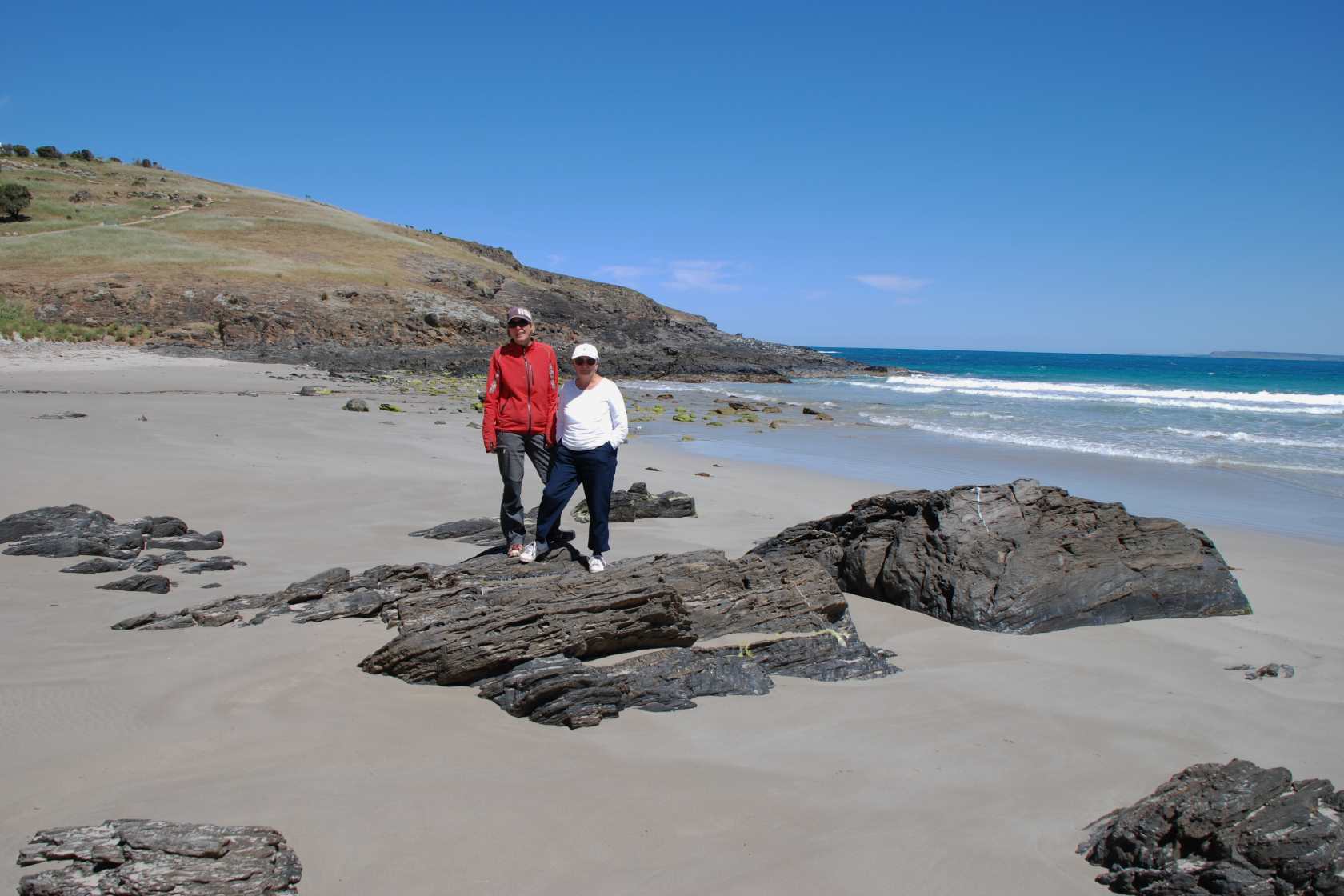 Along the coast we slowly continued towards the border with Victoria. This part of the coast is especially captivating because of the Limestone cliffs. We made a visit to the Coorong National Park, a coastal park consisting of dunes, lagoons and sandy beaches. We were not really convinced by this one.

A bit further south we stopped at Canunda National Park, which is mainly accessible for 4×4 vehicles. Large dunes and a beautiful coastline with great limestone cliffs dominate this park. Exactly on one of these cliffs with a magnificent view we spent our first night – although not quite legally. But for this place we would have even accepted a fine. 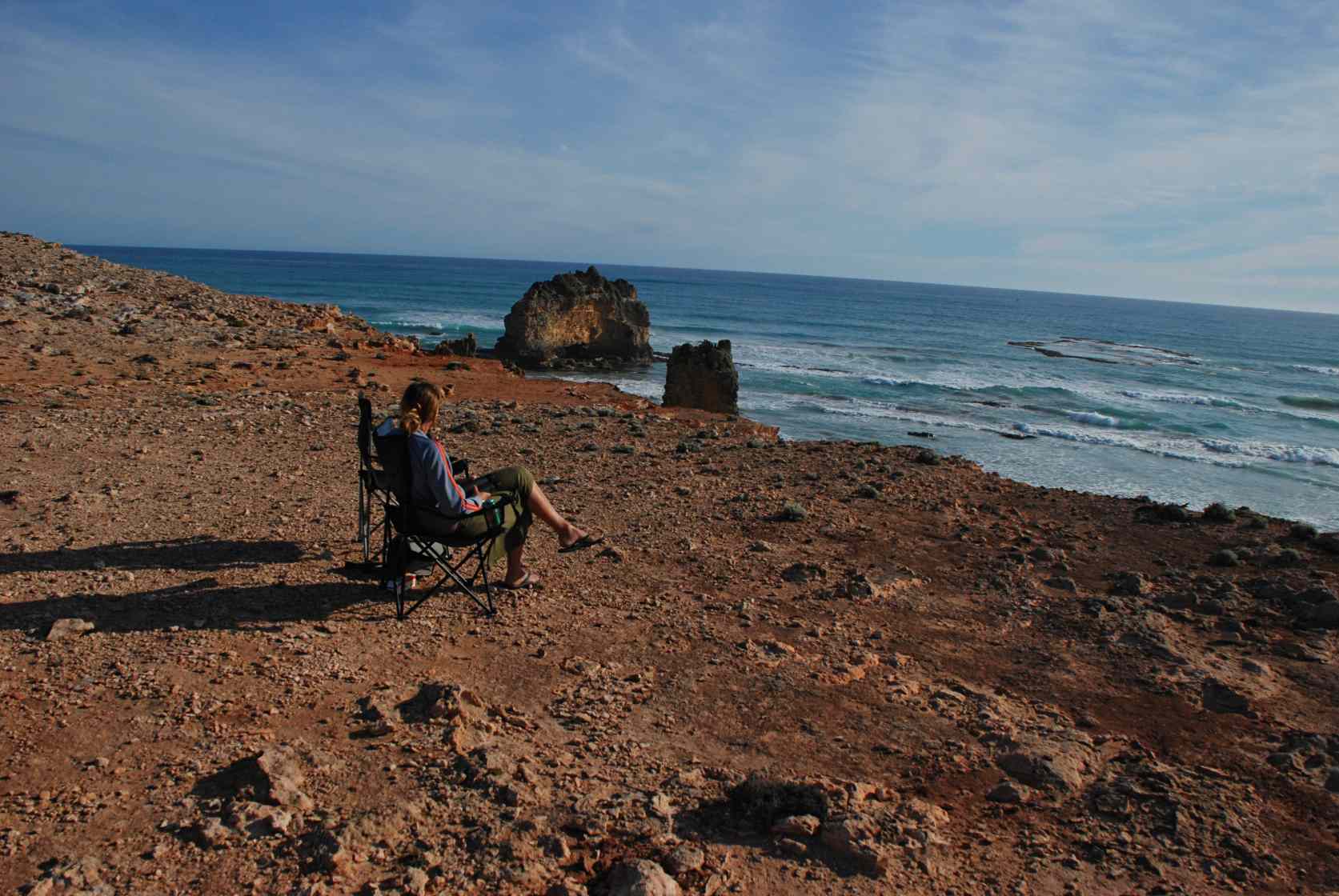 The next morning we started the 4WD track, which leads over 50km over dunes along the coast. For us, these were the first real dune experiences, so we were all a little nervous. As one learns to do, we got out at each major dune, assessed the situation, and considered coming back up should we need to turn around. 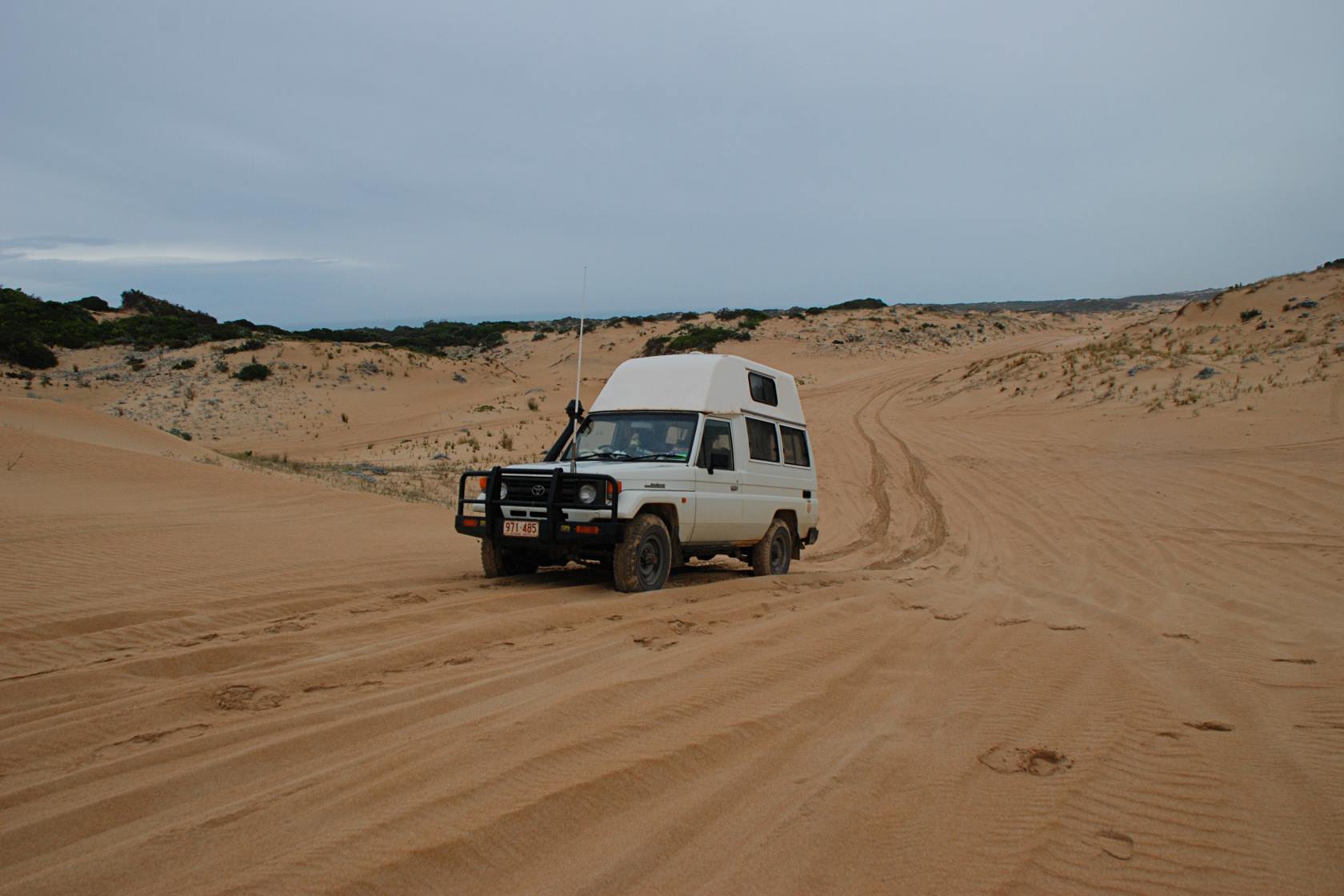 Speedy mastered the first part of the route without any problems. However, after about half the distance we arrived at a dune, which was too steep. Even after several attempts, we did not manage to get up. So there was nothing left to do but turn around. However, it was great fun to drive through the beautiful dune landscapes. 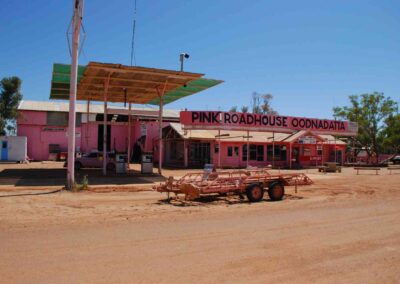 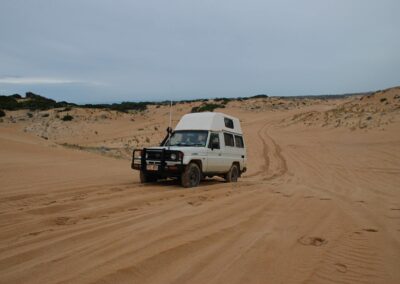 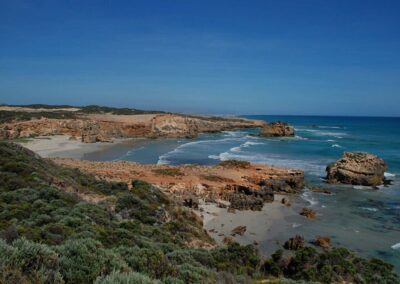 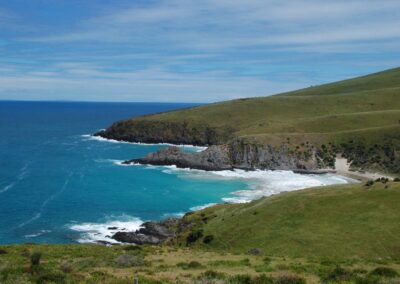 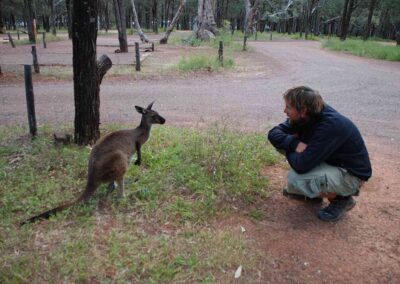 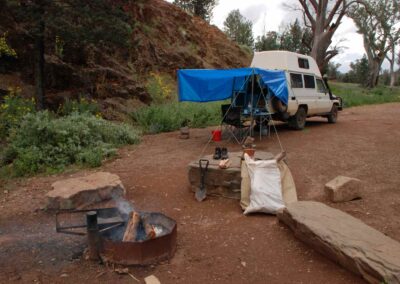 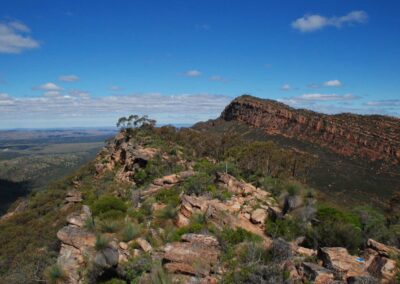 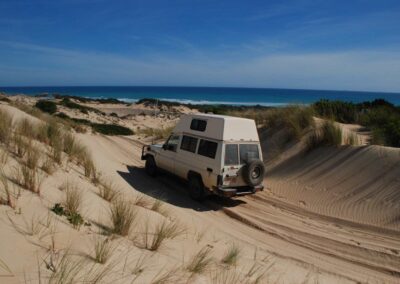 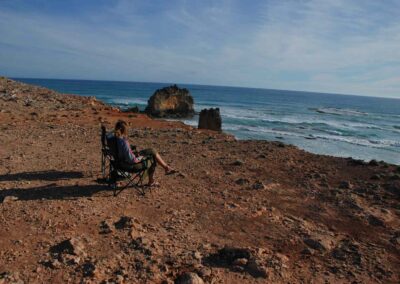 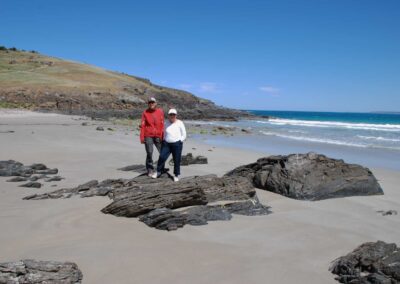 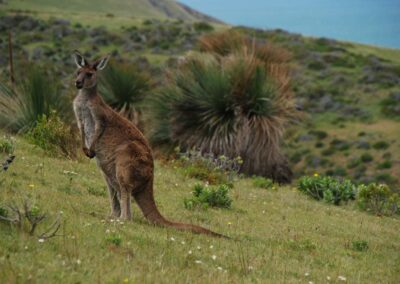 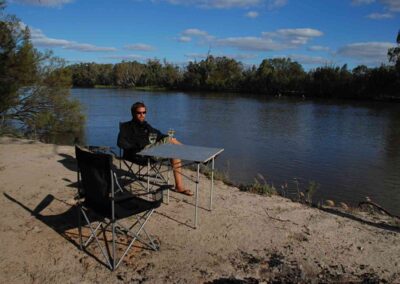 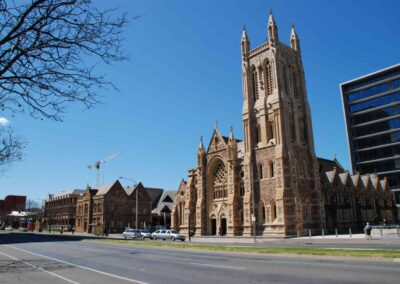 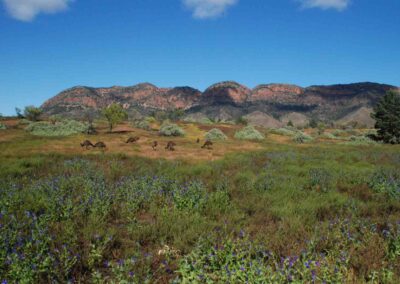 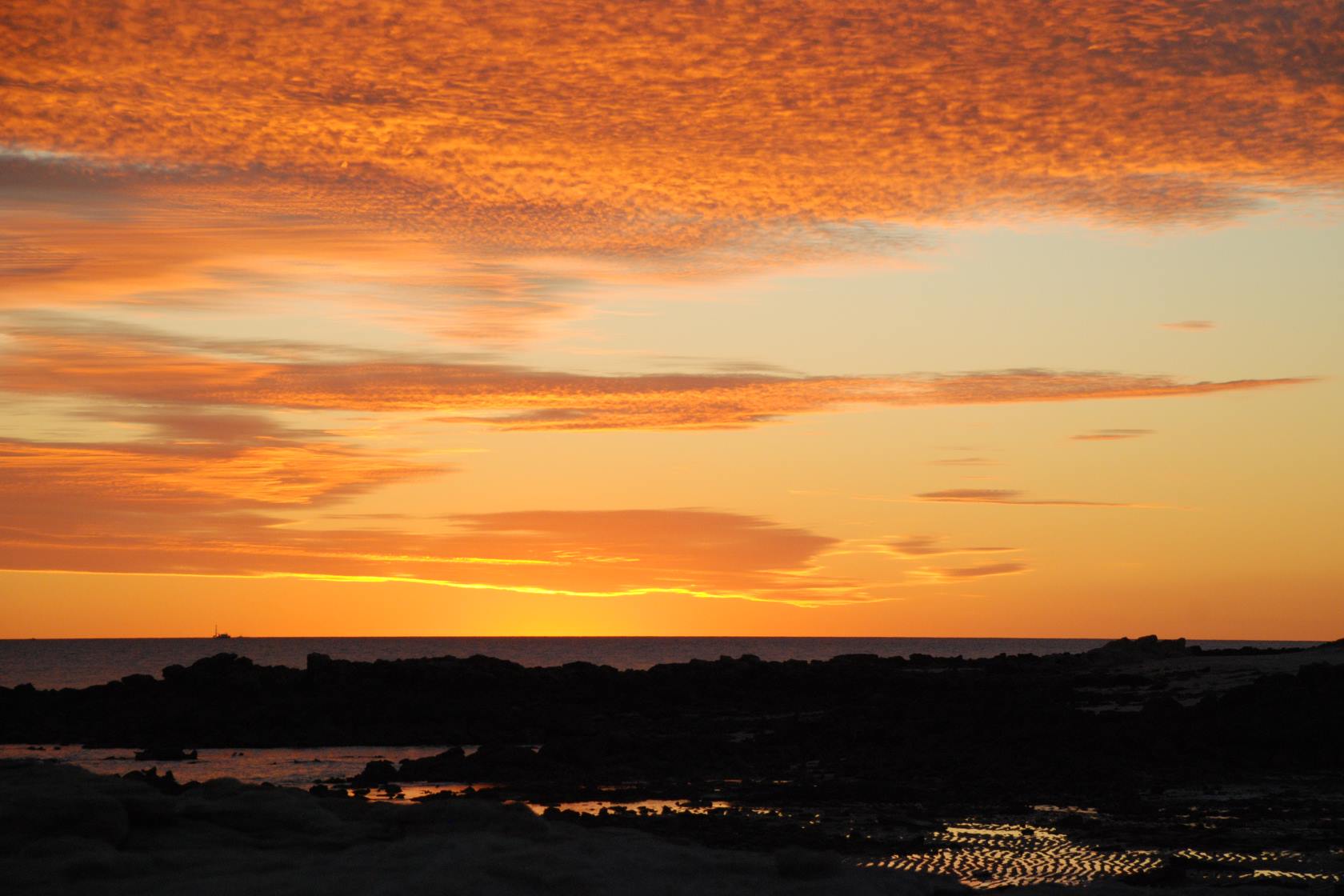 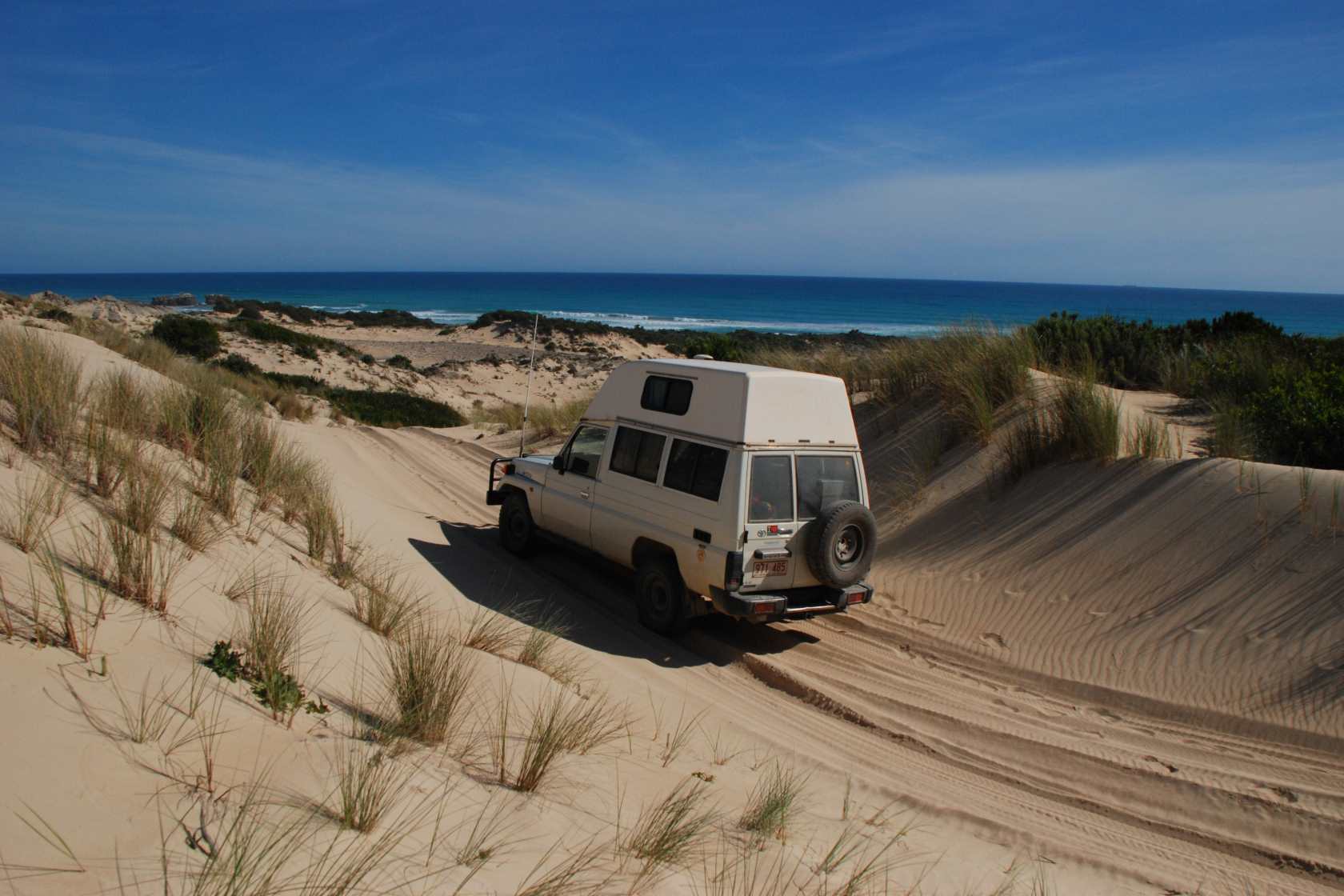